A step-by-step guide on how to select Indexers

How to choose a profitable Indexer?

This guide will explain everything you need to know about choosing Indexers. With the right Indexer at your side, you can be a profitable Delegator that turns an attractive return on your delegated GRT. Let’s jump right into it. 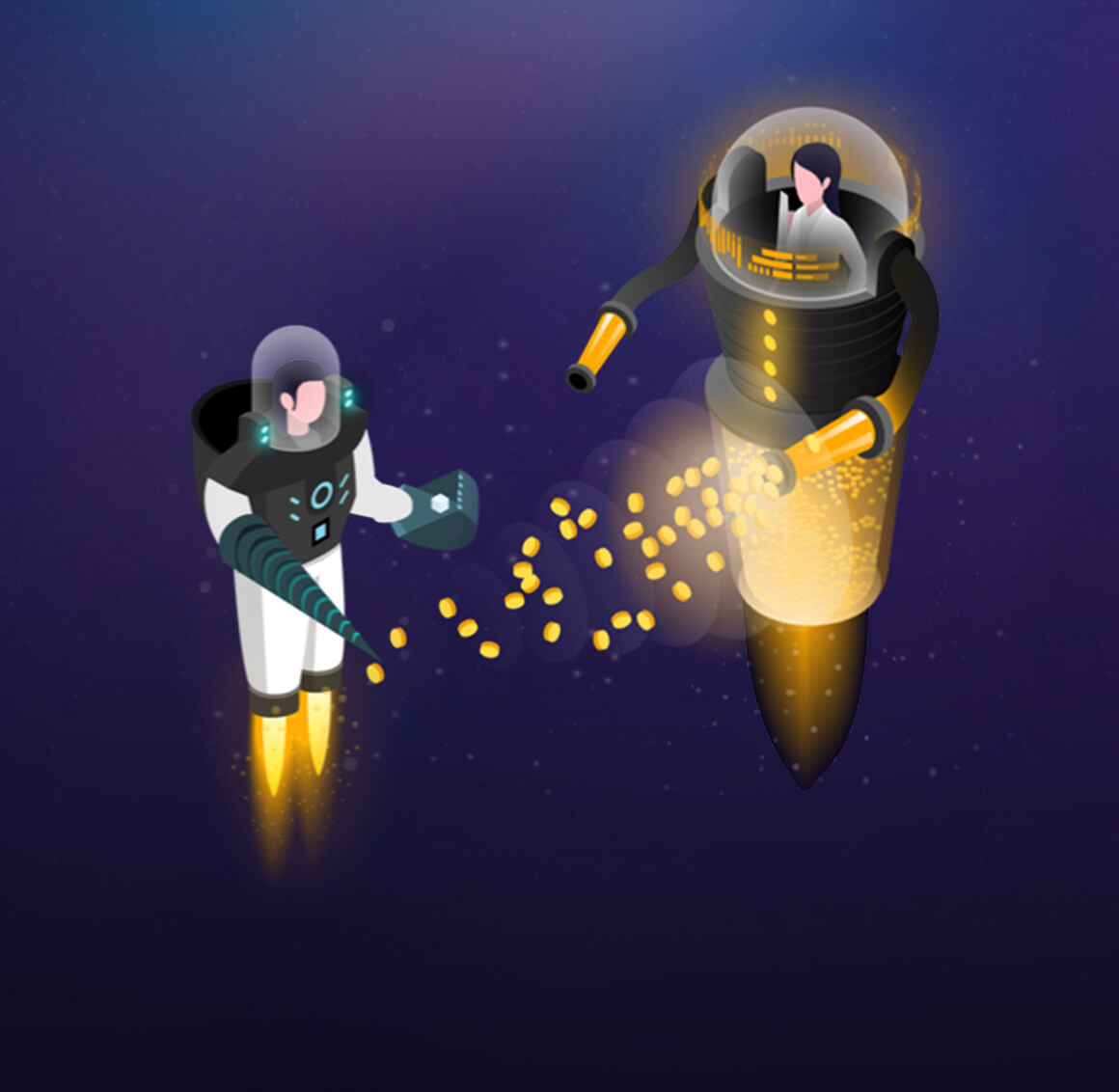 This guide on selecting Indexers is also available as a video: 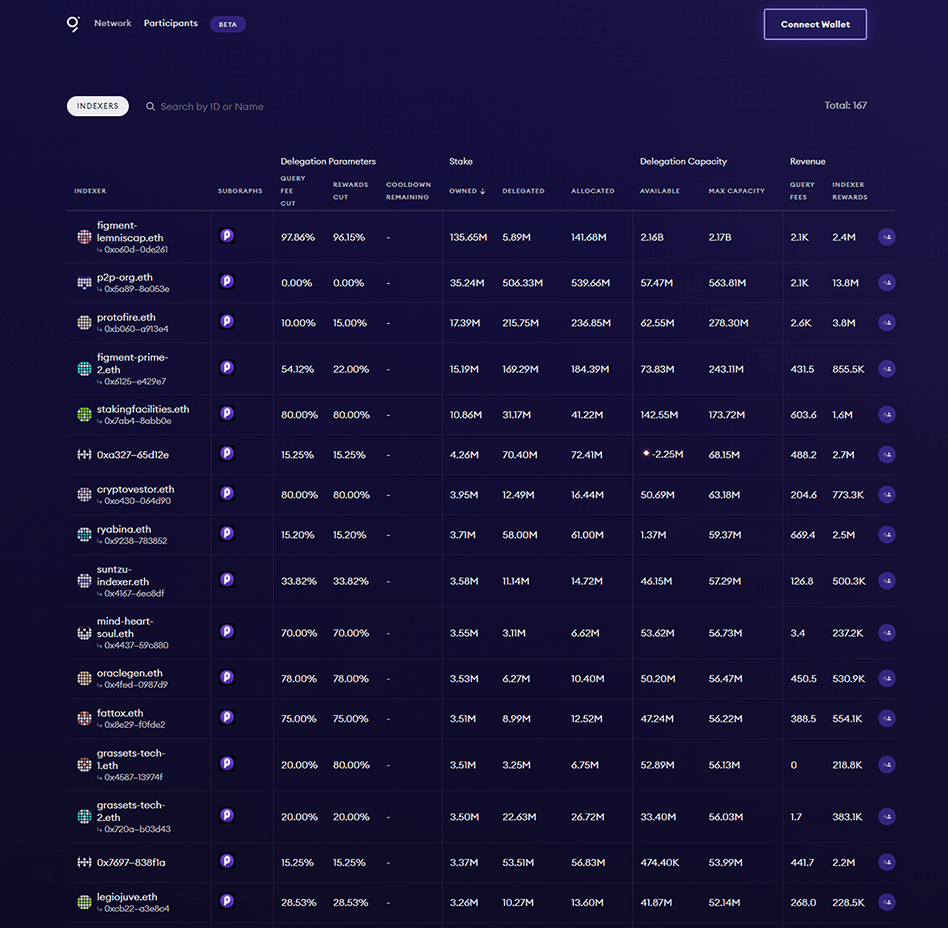 The official network page is an important tool for Delegators as it gives you a quick overview of important Indexer metrics. Aside from that, it is the go-to-resource for important statistics about the entire ecosystem such as total stake and token supply.

To get a quick overview of the available Indexers, you can use the metrics that can be found at the network page. Understanding what each value describes and interpreting it correctly is an important step towards choosing a profitable Indexer. Let’s have a look at the first three values you can find on the page: the delegation parameters.

The principle behind the query fee cut is exactly the same as with the reward cut. The percentage shows you how much of the total query fees an Indexer keeps for providing their services.

Important: During the initial stages of the network, query fees will be minimal.

Important: If an indexer has set the reward cut to 100%, you will receive no indexing rewards.

Indexers in The Graph Network are free to choose a parameters cooldown. The value indicates how much time is left until an Indexer is allowed to make adjustments to their reward and query fee cuts.

Important: Indexers that have not selected a cooldown can change parameters as they please.

When evaluating Indexers, it is important to not only have a look at the reward cut and query fee cut percentages but also at the parameters cooldown. If the cooldown is set to 0 days, an Indexer is allowed to change their parameters whenever they want. In practice, some Indexers may initially set a very low percentage (i.e. 20%) to attract delegators with favorable conditions and an attractive APY. However, as soon as the Indexer has received enough delegations or has maxed out their delegation capacity, they may change their parameters. The inherent risk with this is that a dubious Indexer could switch to a 100% reward and query fee cut so that their Delegators will no longer receive any rewards. The Delegators of this particular Indexer would be faced with 28 days of opportunity costs because of the undelegation thawing period during which their GRT are not able to earn any rewards.

The longer the parameters cooldown of an Indexer, the greater your protection from unexpected changes to reward cut and query fee cut percentages.

The effective indexing rewards cut is another important metric to consider. It will show you how much of the reward earned with your GRT is being taken by the Indexer. Let’s assume you delegate 100k GRT to an Indexer who has staked 100k and offers a 50% rewards cut. In this particular case, the effective reward cut would be 0% since the rewards would be split equally. With a reward cut of 75%, the Indexer would take half of your rewards, hence the effective cut would be 50%. A negative effective cut shows that an Indexer is subsidizing the rewards of their Delegators with their own.

Effective cut is the actual commission taken by the indexer after considering how much the delegated stake cut contributes to the total stake.

The stake an Indexer has deposited, which is subject to slashing in case of malicious behavior or mistakes.

The stake an Indexer has received from their Delegators to be used as allocation.

The total stake that an Indexer is actively allocating towards the subgraphs they are indexing.

The higher the collateral (in the form of staked tokens), the more is at risk for the Indexer.

The capacity an Indexer can still productively accept before having to deposit more stake.

The total capacity of delegated stake an Indexer can productively accept from Delegators.

Total amount of query fees and indexing rewards of one indexer over all time. If 0, the Indexer is not active.

If an Indexer is overdelegated, your rewards are diluted. This is indicated by a negative number and a small star next to the available capacity. If this is the case, it may be more profitable to choose an Indexer with similar metrics that is not yet overdelegated. 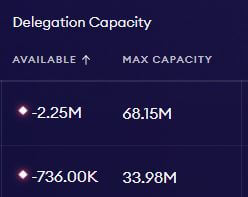 Well done! You’ve learned what the values of each Indexer mean and how to interpret them correctly. This is the basis for evaluating Indexers.

Once accustomed with the metrics of an Indexer, you can go ahead and start comparing indexers with each other. This helps you to better understand which indexers are more profitable than others. 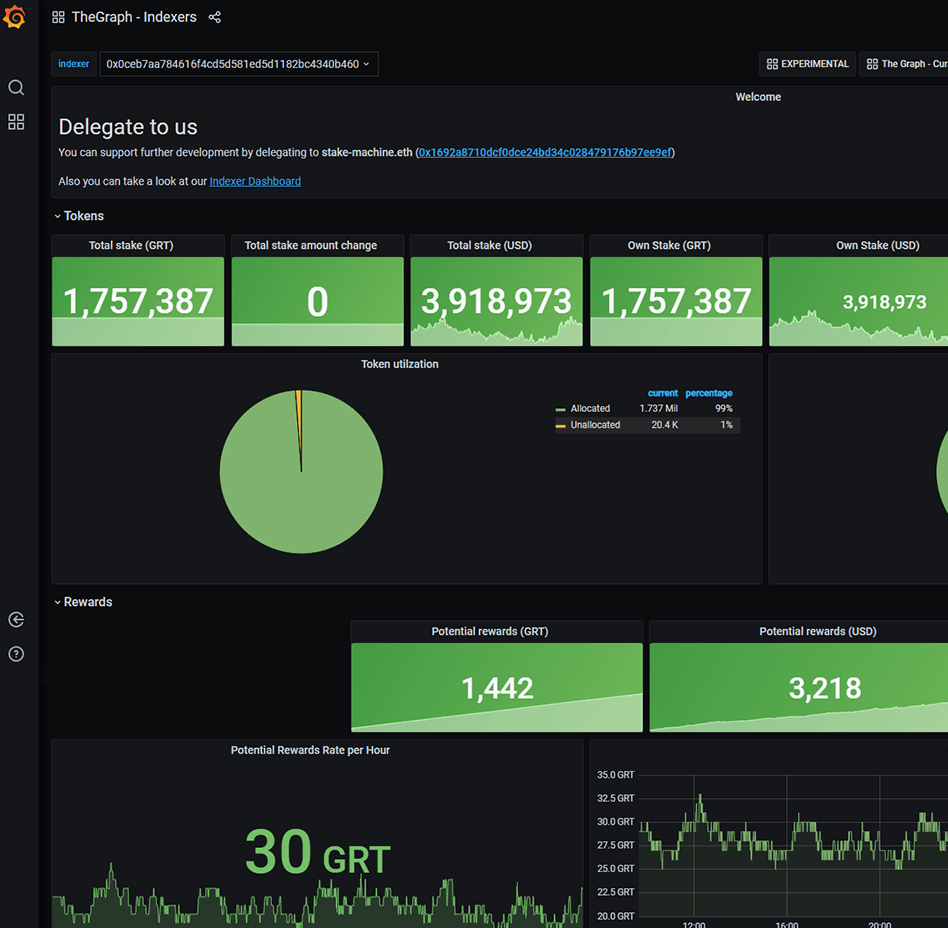 It is not recommended to select Indexers based on the attractiveness of their reward cut and query fee cut alone.  This is because there is a variety of different factors at play that all influence your earnings potential with an Indexer. It is therefore highly recommended to make use of different tools that help you to better compare your available options as a Delegator.

Return on investment based on delegated funds

Days since the Indexer has started indexing

The dashboard over at Graphlets.io gives you an overview of each Indexer’s historic ROI to see if an Indexer is active or not. The delegation ration shows you if an Indexer may become overdelegated soon or is already overdelegated.

The Oracleminer.com dashboard is excellent for checking pending rewards of an Indexer. The site is especially relevant to check if your Indexer is still active and performing well or not.

Rewards that have not been distributed yet

How much of the available stake is allocated

Changes of an Indexers fee and reward cut percentages

Rewards an Indexer earns per hour

How often an Indexer has force closed an allocation

The Stake-machine.com dashboard is excellent for historical and live data on The Graph Network.

Over at the Graphscan.io dashboard you can learn more about Indexer APYs and their effective reward/fee cuts. The latter helps you to see if the real cut is significantly worse than the advertised one.

The actual reward/fee cut of an Indexer

The subgraphs an Indexer has chosen to index

Last time the Indexer has allocated

By using straightforward spreadsheets you can calculate your approximate delegation rewards for each Indexer. This helps you to find out how high your earnings potential with different indexers could be. 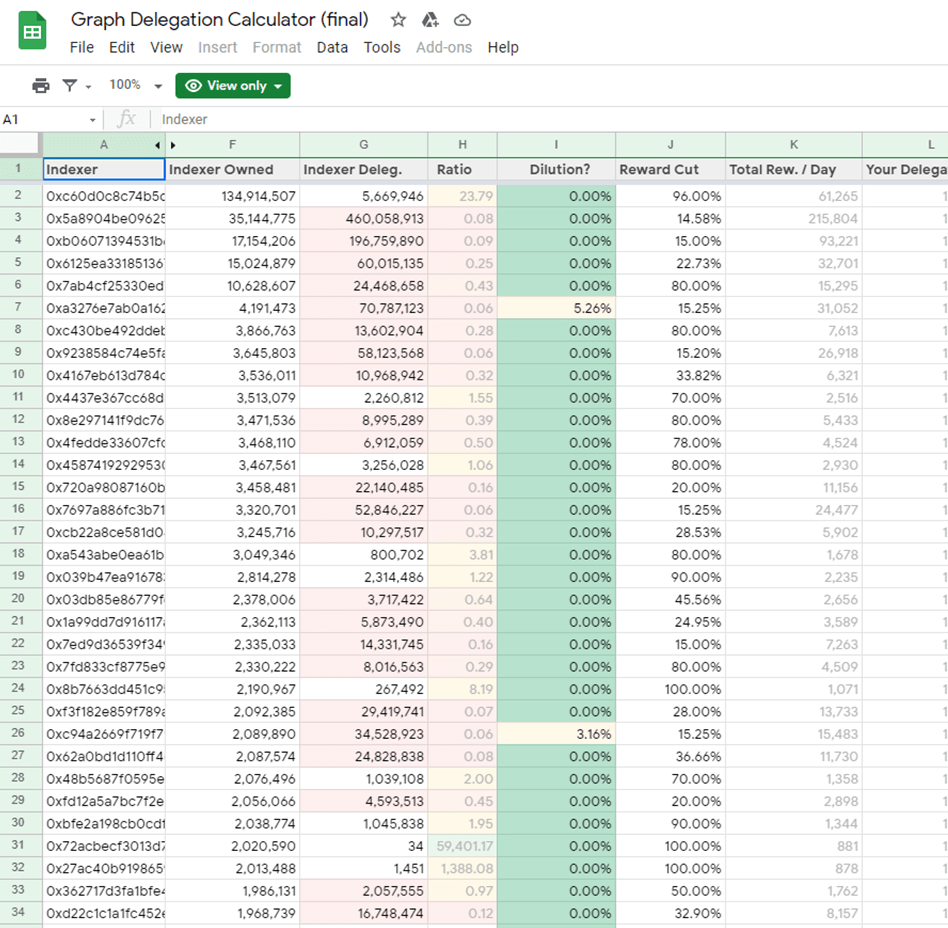 Proudly brought to you by The Graph Academy

We’ve created an easy-to-use calculator that shows you how much GRT you can earn per day with each indexer. Also included is a functionality that shows you after how many days you break even. All you need to do is to enter the amount of GRT you wish to delegate.

The calculator does the rest. Simply switch to the sheet called Reward Calculator and you will see your potential delegation rewards for each indexer.

You’re doing great! After you’ve learned to interpret Indexer metrics, you are now capable of thoroughly comparing Indexers with each other via different tools.

Selecting Indexers purely based on numbers could backfire if you do not take into account their trustworthiness and reputation. 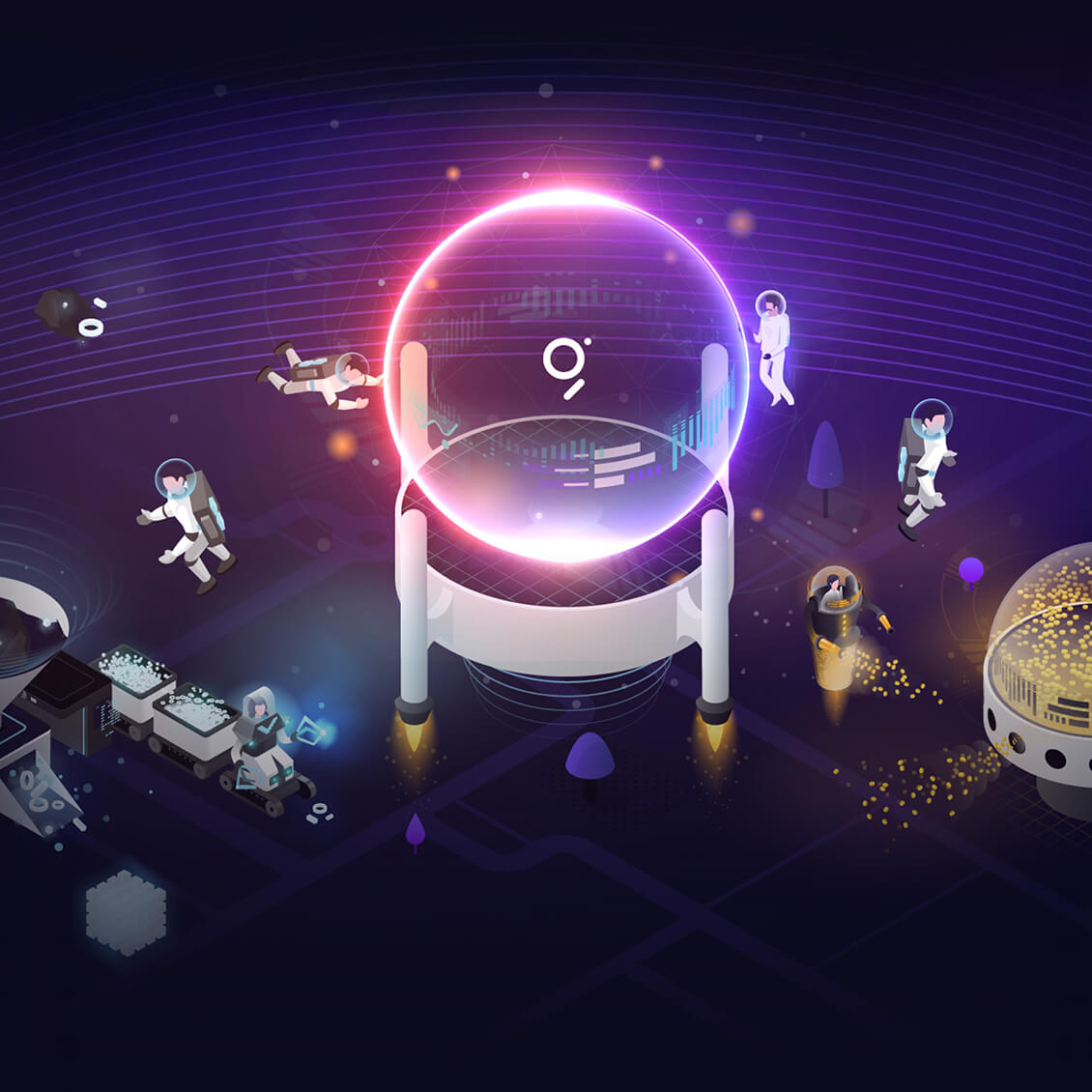 Does your Indexer live and breathe The Graph Protocol?

Once you have found Indexers that offer favorable conditions to Delegators, it can be quite useful to do your due diligence on an Indexer. Mind you, this does not have to be an overly complex research but it should help you to assess the trustworthiness and reputation of an Indexer.

To accomplish this, you can head over to the official discord server of The Graph and the official forum to find out more about an indexer.

If an Indexer is not active in the community, make sure that you can contact the Indexer in case of questions through other channels.

Here is what you want to look out for to assess the trustworthiness and reputation of an Indexer:

Selecting Indexers is an important decision that shouldn’t be taken lightly. The protocol rewards users that choose an excellent Indexer and stick with them for a longer period of time. Here’s what you should take into consideration when making your selection:

Discover our selection of tools for Delegators that provide you everything you need to succeed as a Delegator in The Graph Network: Delegator Resources.